Frankenstein starts in the Arctic, centres on Mont Blanc and ends again in the far north. Dracula too covers ground, criss-crossing the whole of Europe.

In Frankenstein the man who creates the "monster" is both victim and perpetrator, as is his creature and shadow side. In Dracula we are invited to admire the ingenuity of the wicked Count as much as that of the hero Van Helsing, and the complicity of the apparent victims blurs the boundaries of responsibility and guilt. Essentially, there could have been no Dracula had there been no Frankenstein. So I would say, take heart. If these students and their remorseful tutor get cracking, they can all get As because they already have the answers at hand.

But this raises a more serious issue. Of course students need to get facts right, names right, dates right — and of course, texts right.

So do teachers. But literary works are not handed down fully formed as a result of some God-given inspiration.


The artist lives in the world and so the work reflects this. If these students were being asked to write on the historical and cultural context of Frankenstein, as opposed to Dracula, then they would indeed have a problem. But books too make up the world of the writer, and texts very often refer back, refer across, answer, question, or challenge other texts. Too often syllabuses and reading lists privilege the old idea of the inviolable text.

Students need to be encouraged to read books in the light of their historical setting, but especially in comparison with their literary predecessors. I said that students sometimes muddle their Janes. But there might be more to this than mere sloppiness.

Charlotte Bronte did not admire Jane Austen. Of the ever popular Pride and Prejudice she complained: "And what did I find? 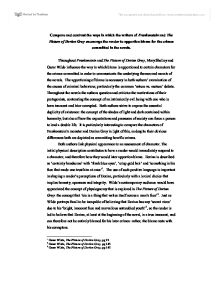 The monster realizes his ugliness when he looks at his reflection in the water. Once the creature has been corrupted he is no longer a noble savage as he has lost the pure goodness he has when he was first created.

A typical theme of Gothic literature is to use the weather and in both Dracula and Frankenstein the weather plays an important part in symbolizing the obscure supernatural events. The three critical thunderstorms in Frankenstein all relate to a significant occurrence that is about to happen. They coincide with the appearance of the monster; this could mean that the storms are not of natural occurrence but of Victor going insane.